Mourning the sculpture of Jesus Christ 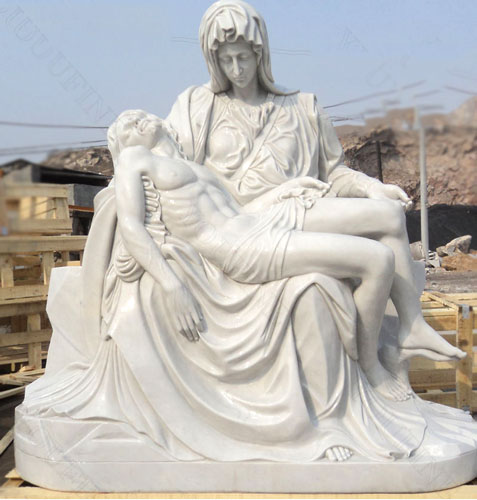 Vatican City, Italy, is the site of the Catholic pope and the largest shrine in the world, as well as the Holy Land of Catholic believers. There are countless paintings and statues in the temple of St. Peter. The world-famous sculpture of mourning Jesus Christ is placed in one of the halls of Peter. The statue was written by Italian artist Michelangelo. In October 2017, I had the honour to follow Father Liu Zhe on a pilgrimage to the temple, in the main hall. Once again, I came to this very familiar sculpture of mourning Jesus Christ to pay homage and pay homage, and I saw Jesus, with her right hand cuddling around his crucifixion, with her left hand slightly spread out, her eyes bent down, her face mourned, and her face filled with sadness. Between indescribable helplessness and sincere love, the mother undefined obedience to God and the grief of the bereaved child are vividly portrayed. In this sculpture, the face of the Virgin is vivid, as if it were real. No matter who came forward to watch it, they were attracted by the superb engraving techniques of the master of art. People did not want to leave for a long time, and they chanted scripture and prayers in front of the statue of the Virgin Mary.

In front of the statue, I thought, on Mount Galvalho, the Virgin saw her son framed by the wicked, tortured and humiliated, and the wicked crucified Jesus alive in her presence. There is nothing the Virgin can do to save her son, and her heart is broken. Can she not mourn? The great saint Ostine said, “Jesus suffered from the beating, the crown, the cross and the nails in the heart of the Virgin. Jesus was crucified with the holy body, the Virgin on the cross with the Holy Heart. Jesus gave his holy body, and the Virgin gave her heart to make up for the sin of our people. In front of the statue of the Virgin, I prayed to God for the love of the world, to mourn the pain of the Virgin, and to endure the suffering of the Virgin, The Holy Heart prays for me. In front of the sculpture, the narrator explains in detail that this sculpture of mourning Jesus Christ was written by Michelangelo, an Italian Florentine who was a famous sculptor, painter, architect and poet in the Renaissance. Among the three known at that time as Florenceundefineds Renaissance, Michelangelo, Leonardo da Vinci, Raphael. Michelangelo made a splash when he broke into Rome at the age of 23, when he was an unknown minor, mourning the placement of Jesus Christ in the Vaticanundefineds St. Peterundefineds Hall. People are talking about this refreshing sculpture, how can the Virgin be younger than Christ? How can an adult son lie on the knees of a young mother? Whoundefineds this sculpture? Speculation has been rife that the author of the work will be described as another famous sculptor. When Michelangelo heard of it, he went to St. Peterundefineds Hall that night and engraved his name with dignity on the coat of the Virgin, the Florentine Michelangelo. It was the first and only time that he had signed his own work, and it marked his ascent to the altar of art as an art conqueror. Later, someone attacked him and said, “Why is it that sculpture of the Virgin Mother as a young village lady is not intended to speak, and so on?” Michelangelo also answered the classic, since the Virgin Mary stands for purity, sublimity and sanctity, then she must be able to avoid the waste of time! According to the history of the church, the statue was damaged by human beings and then restored and protected by a large glass in front of the statue to allow people to pay their respects and worship.

Michelangelo created a number of works of classical art while he was alive, and he was involved in the design of the huge circular dome of St. Peterundefineds Hall. There are many murals and statues in the Museum of Peter, which are exquisite, large, complex and difficult to imagine. Michelangelo alone. When I looked up at the dome murals in the main hall, I marveled at the panorama and the layout of the theodolite. Michelangeloundefineds sculptures are on many buildings in Florence, Italy, and he has almost become the cityundefineds business card.

Michelangelo was pious to God all his life, in pursuit of the perfection of art, never married, working hard all his life, having hardly ever enjoyed the pleasures that ordinary people should have enjoyed, but creating masterpieces beyond the average manundefineds imagination, no matter how many. Michelangelo can be regarded as an ancient man of all kinds and high quality. His artistic artistry has made the world savor for 500 years and intoxicated for 500 years. At the end of the pilgrimage, I bought a sculpture of a small handicraft that mourned Jesus Christ, and when I saw it, I thought of the statue in the temple of St. Peter that mourned Jesus Christ. There will be a scene of grief in the hands of our Lady of pain cuddling Jesus, which will remind me not to sin against God again, to do the things of the Lord of Heaven, to pray for me in the heart of the Virgin.